An unusual press conference in London, but not one without precedent 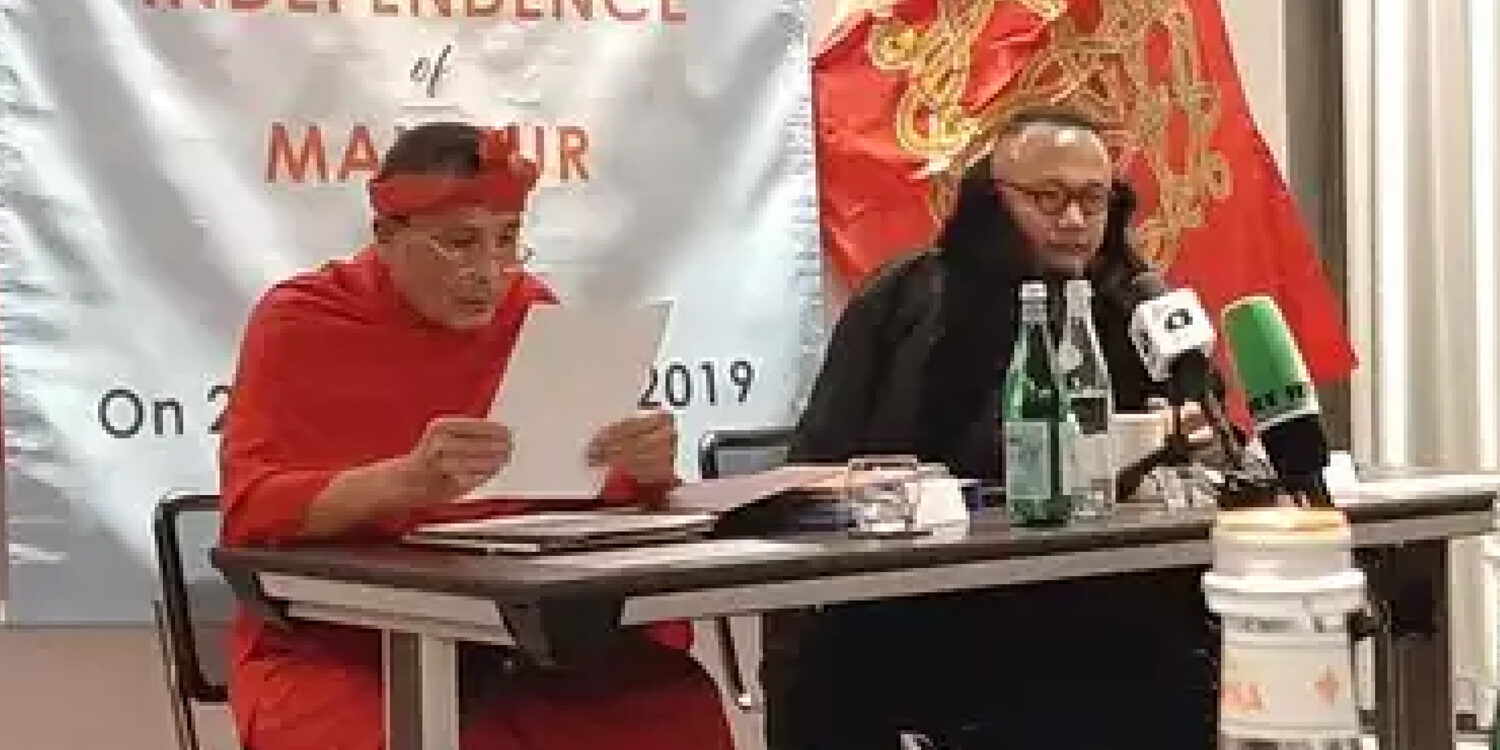 The press conference in which two dissidents from Manipur declared the formation of a ‘Manipur government in exile’ was unusual in more ways than one. It was organised in a private room inside a five-star hotel in the middle of Soho on Tuesday afternoon, and addressed by a man dressed in a monk’s red robe and red bandana and another wearing a black cape with a fur collar.

The press conference in which two dissidents from Manipur declared the formation of a ‘Manipur government in exile’ was unusual in more ways than one. It was organised in a private room inside a five-star hotel in the middle of Soho on Tuesday afternoon, and addressed by a man dressed in a monk’s red robe and red bandana and another wearing a black cape with a fur collar.

Behind them was a drape with the words — Announcement of declaration of independence of Manipur, two self-made
unrecognisable red flags and a large map. Pricey tea and coffee were laid out, as were huge pads, pencils and press packs, including a release from the ‘Office of the Chief Minister’s Secretariat, de jure Government of Manipur’.
Even the invite was curiously worded. It read: “You are requested to attend for coverage an important political conference about the future of Manipur State and the Indian government. Yamben Biren, Chief Minister of Manipur State Council, and Narengbam Samarjit, Minister of External Affairs and Defence of Manipur State Council, will address the press conference. With the consent of His Highness, The Maharaja of Manipur, important announcements will be made before international media.”

Journalists, by now aware that they were about to witness something rather strange, made their way to the press conference room after a wait in the lounge. And the proceedings did not disappoint. In front of bemused reporters, Biren and Samarjit read out a declaration of the “independence” of Manipur from India. They said members of the ‘Manipur State Council’ and representatives of the state in the council had formed a de jure government at the palace in Manipur on March 14, 2012. They said this ‘government’ had been running parallel to the de facto one.

A press release handed out to scribes said the de jure government of Manipur had shifted to London and ‘all political and official matters of the state of Manipur’ would now be operated by the de jure government from London’. It said ‘the de facto constitution of India has been forcibly illegally operating in\Manipur from January 22, 1950, till today’.

Samarjit and Biren said they could not make the announcement in Manipur as they “would have been killed”. They got political asylum in Britain in August and formed a ‘government in exile’ in London on September 29, they told journalists.

On TOI’s query on whether they did not need permission from India to undertake such a move, Samarjit responded with a quizzical “sorry?”

“We will debate with the President of India on this matter and we open the door for talks. But India does need to apologise for what they did for the last 70 years. We could not raise the matter before because we were suppressed by draconian laws,” he said. When TOI asked who else was in this ‘shadow government’, he said, “We have many people but we cannot tell you where they are.”

Explaining their next steps, Samarjit said, “We will submit a petition to the British Queen.”
“We will get an order from the Privy Council and then move the UN to become a member state and seek recognition from different nations. This is a legal matter and we hope many countries will recognise our independence.”

“The Indian government violated the UN charter when it annexed Manipur. We have our own constitution and the king is our absolute sovereign,” he declared. “The Palace in Manipur is our office. We are not inviting India with arms. We are inviting India on a legal point. We want a peaceful settlement”.

“Our de facto government has been occupied by the Indian government,” Biren said. “They are overlapping with our de jure position. We have never been a part of India,” he explained. As the press briefing wrapped up, one broadcast journalist murmured that he thought it had been called by the official Manipur government. Equally puzzled were residents of the northeastern state, already worried about the fallout of the peace talks in neighbouring Nagaland

One of them told TOI, “The outfits they [Biren and Samarjit] are wearing are not traditional outfits from Manipur. I don’t know what they are called. I don’t know what the flags are either. They are self-styled. These two men do not run the Manipur government and have nothing to do with it. The King has nothing to do with these two. We are stunned. We are happy with the Union government. We are part of India. There is no uprising.”

Strangeness notwithstanding, such a press briefing by north eastern dissidents is not unprecedented. The late Naga nationalist leader, Angami Zapu Phizo, who declared the Nagas’ independence from India in 1947, held a historic press conference in London in 1960 in which he spoke about Indian atrocities in Nagaland. The Naga insurgency — the aftershocks of which are still being felt as the Centre and rebel outfits try to agree on a settlement — was one of India’s bloodiest and most prolonged insurgencies.

Recent News
Any Questions?
Feel free to contact us if you have any questions. Please fill out the form below and we will be in touch with you.
Go to Top